YOU Can THRIVE This Summer with the Build Abundance Promotion!

As you watch the world burst open with LIFE, now is the time to GROW your business.

The trees are producing green leaves and delicious fresh fruit. Meanwhile, YOU can create your own ABUNDANCE that will produce wealth for yourself now and for the future.

The new Build Abundance Promotion is here to spur exciting growth that PAYS.

» Get paid for expanding your business NOW through fun promotional incentives.

» Lay the foundation to get paid in the future through residual income!

Help Others to Gain from this Opportunity

With the Build Abundance Promotion, you earn by helping your new enrollees to take the first steps with their business and form an organization that is ACTIVE and PRODUCING!

WHAT DO I WIN?

ESPs and AutoShip are two of the most effective ways to gain strong, active legs in your organization. The Build Abundance Promotion uses these two strategies to GROW your business FAST.

In addition to this ABUNDANCE payout, your efforts can also help qualify you for 3 of our most popular ways to earn!

To create ABUNDANCE, you need a strong, healthy business that is producing earnings for you on as many levels as possible.

The Build Abundance Promotion focuses on establishing that structure and incentivizing you and your personal enrollees to be active and productive.

Plant your roots by enrolling a new Affiliate and then helping them to enroll others. Enroll three generations deep to establish a strong organization. These “roots” send GCV up your organization, supplying your business with residual income.

Help your new enrollees to make a strong start by enrolling each one with an ESP. Then, help them to create their AutoShip, a recurring monthly order of 50PV+.

Become Binary Qualified and start seeing the fruit of your investment sooner!

Completing these steps will win you an Abundance payout… PLUS, YOU will be MVP & Binary Qualified, and your first two generations will be Binary & ESP Qualified.

SHOW ME HOW IT’S DONE!

Step 2: Personally Enroll a NEW Affiliate with any* ESP AND an AutoShip of 50PV+ (helping them become Binary Qualified).

Step 3: Within 30 days of your PE’s enrollment, they must enroll one Affiliate for each leg (two total) with any* ESP AND an AutoShip of 50PV+.

*Any ESP will qualify; however, matching ESP levels can maximize your payout – keep reading! 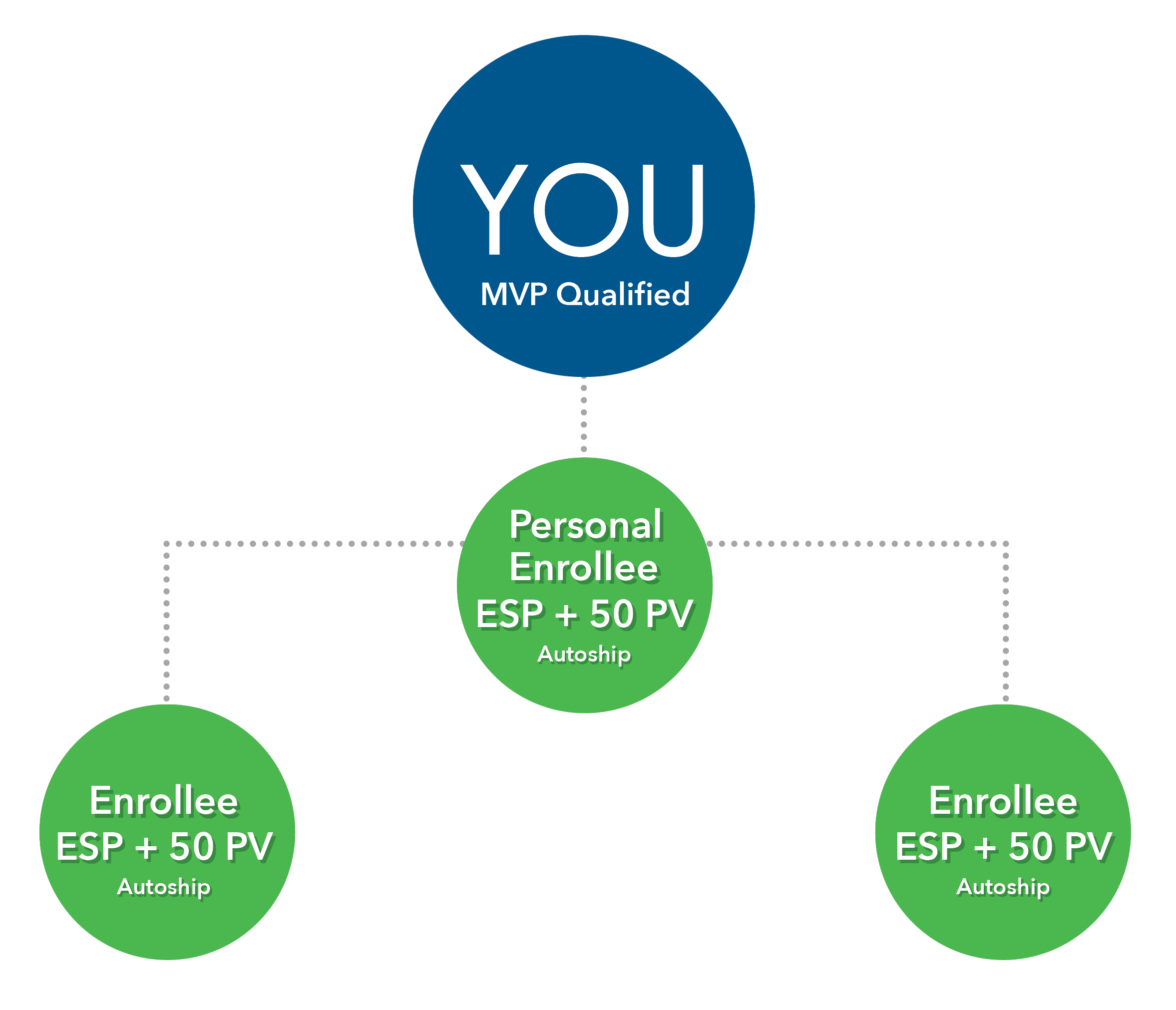 As soon as all of the AutoShips of this Trio process for the first month, you will receive a payout!

You can create as many Trios as you want and get paid EVERY time!

But don’t stop there!

Create a 7-Strong Tree for a bigger ABUNDANCE payout.

Step 1: You start with a TRIO you’ve already created (see Part 1 above).

Step 2: Upon enrolling your last TRIO enrollee (Gen 2), you start a new 30-day clock to add a new generation (Gen 3).

Enroll one Affiliate for each open position (four total) with any* ESP AND an AutoShip of 50PV+.

*Any ESP will qualify; however, matching ESP levels can maximize your payout – keep reading!

As soon as all of the AutoShips for the new generation process for the first month, you will receive a payout!

7-Strong Trees generate an ABUNDANCE payout according to the lowest ESP in the group.

Take a look at your total ABUNDANCE earnings per 7-Strong Tree!

But wait! We want to pay you for your extra effort!

If you enroll a higher ESP in your ESP-1 or ESP-2 tree, gain an additional $20 per higher ESP enrollment!

AND THAT’S NOT ALL!

Enrolling with AutoShip creates a root that feeds GCV to your organization every month, generating residual income and building wealth!

You can also qualify for additional ways to earn FAST bonuses including:

Discover all 11 Ways to Earn in your Gano Excel Wealth Plan!

And Take Root in Success!

"And so with the sunshine and the great bursts of leaves growing on the trees, just as things grow in fast movies, I had that familiar conviction that life was beginning over again with the summer." -- F. Scott Fitzgerald

Disclaimer: Any Affiliate who attempts to enter or in any way participate or attempt to participate in the contest conducted by Gano Excel USA, Inc. agrees to be bound by the terms and conditions provided in these Contest Rules, as well as Gano Excel’s interpretation of these general rules which are final and binding in all matters relating to this Contest. Affiliate also agrees to be bound by Gano Excel’s Policies and Procedures. Any violation of the Policies and Procedure will disqualify the Affiliate from the Contest.

Contests are subject to and governed by applicable federal and state laws. Participation in this Contest is void where prohibited or otherwise restricted by law.

The Contest is only open to active U.S. Gano Excel Affiliates who are 18 years of age or older.

The second series of enrollments create a “7-Strong Tree.” The Participating Affiliate helps each Gen 2 Enrollee on an existing Trio to enroll two additional affiliates (“Gen 3 Enrollees”), placing one on each leg of the Gen 2 Enrollees’ binary organizations. Gen 3 Enrollees must be enrolled within 30 days of the last Gen 2 Enrollee’s enrollment date, or before the last date of the promotion, whichever comes first. Each Gen 3 Enrollee must enroll with an ESP and create an AutoShip of 50PV or more. This initial order and recurring order must be made at the time of enrollment. Only U.S. enrollments will qualify.

Upon enrolling with Gano Excel, all new Affiliates must provide SMS account verification to qualify for the promotion.

There are two sets of bonuses for Participants depending on the series of enrollments completed and the lowest level of ESP selected in the entire group.

Completing the 3-enrollee structure will result in a single bonus, paid after the first month’s AutoShip for each enrollee is processed. The bonus will be $25, $75, or $150 if the lowest ESP for the group is an ESP1, ESP2 or ESP3 respectively.

Completing the 7-enrollee structure will result in an additional single bonus, paid after the first month’s AutoShip for each enrollee is processed. The base bonus will be $50, $150, or $300 if the lowest ESP for the group is an ESP1, ESP2 or ESP3 respectively. In the case of a combination of different level ESP enrollments within a 7-enrollee structure, an additional $20 for each higher ESP enrollment will be added to the base bonus.

The bonus payments are a “Draw” which will be finalized after 6 months from the payout date. If any of the qualifying ESPs are returned, Gano Excel has the right to claw back the bonus money through future commissions or charge the Participant’s credit card.

Completing the Abundance promotion does not guarantee future income or success. All Affiliates must remain active to be eligible for compensation in accordance with our Gano Excel Wealth Plan.

Except where prohibited, by accepting a prize, winner(s) grant the Sponsor permission to use their names, characters, images, voices, and likenesses worldwide, in perpetuity, in any and all media now known or hereinafter invented in any and all marketing and promotional materials and waive any claims to royalty, right, or remuneration for such use. Each winner’s name may be included in a publicly available winners list.

RELEASES, CONDITIONS, AND LIMITATIONS OF LIABILITY.

By participating in the Contest, each Affiliate agrees to release and waive any and all claims of liability against Gano Excel and any applicable third party fulfillment service and each of their respective employees and agents (collectively, the “Released Parties”) from and against from any and all liability, loss or damage (including personal injury) incurred with respect to the conduct of or participation in the Contest, or the awarding, shipping/handling, receipt, possession, and/or use or misuse of any prize, including any travel related thereto. By accepting the prize, winner(s) hereby agrees that: (i) to release each of the Released Parties from any and all claims in connection with the Contest and the award or use of the prizes.

Any valuation of the prize(s) stated above is based on available information provided to the Sponsor, and the value of any prize awarded to a winner may be reported to the IRS as required by law. Each winner is solely responsible for reporting and paying any and all applicable federal, state, and local taxes, related to prize acceptance and use not specified herein.

All decisions of the Sponsor will be final and binding on all matters relating to this Contest. Persons who violate any rule, gain unfair advantage in participating in the Contest, or obtain winner status using fraudulent means will be disqualified. The Sponsor will interpret these Rules and resolve any disputes, conflicting claims or ambiguities concerning the rules or the Contest and the Sponsor’s decisions concerning such disputes shall be final.

Gano Excel reserves the right to amend these promotion requirements or rules at its discretion.